The adorable French bulldog tends to be a playful and easy-going family pet. Affectionate and loving of human attention, this dog is generally agreeable around other animals and strangers but is happiest in the company of its owner. Passive owners can expect their French bulldog to become stubborn, so strong leadership is essential. Children should also know to display leadership with French bulldogs to keep these pets from feeling that they need to be leader of the home. 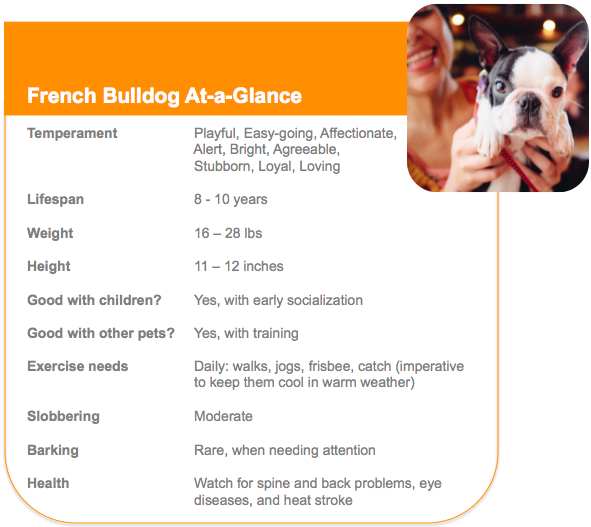 Often smaller than other bulldog breeds, “Frenchies” are small-to-medium pets that usually appear active and muscular with a smooth, shiny coat. French bulldogs are usually well proportioned, with loose skin around the head and shoulders forming the characteristic bulldog wrinkles. Other appearance characteristics include:

The French bulldog is playful and affectionate and make wonderful companion dogs. Loyal and loving, they drave plenty of attention from their human families, and with early socialization, training, and a dominant owner, they are wonderful with both children and adults. These affectionate pets also live well with other dogs, provided proper training.

Frenchies can be willful and stubborn, and can therefore be a challenge to train. Patience and repetition are key, and obedience training is often helpful. Generally patient, French bulldogs rarely bark, and do so only to draw attention to the fact that they need something or are unhappy.

French bulldogs are generally healthy, fit, and quite alert pets. The folds around their jaw and neck should be wiped regularly to avoid infection, as well as the folds under their eyes. Regular brushing and bathing, as well as nail clipping and ear cleaning are also essential.

As with all bulldogs, there are some health concerns to look out for. French bulldogs with blackish-blue hair may develop Blue Dog Alopecia, a hair and skin disorder. French bulldogs may also develop any of several back and spinal diseases, such as chondrodysplasia. Because of this, many breeders advocate spinal x-rays for dogs that are being considered for breeding. Other health concerns to watch for include:

Like some other bulldog breeds, French bulldogs have a very compact airway and so are often unable to regulate their body temperature effectively. They are therefore very prone to heat stroke, and in extreme cases it can be lethal. Those who are considering having a French bulldog as a pet must know that extreme care will need to be taken to keep their Frenchie cool during the summer months. Fortunately these pets have minimal exercise requirements, but should be walked daily in shade and given plenty of cool water. Some airlines have banned French bulldogs from flights because of the stress and potential high heat of the cabin posing significant health risks for these pets. As with many other bulldog varieties, French bulldogs often have difficulty swimming, and should be watched carefully when walking near bodies of water.